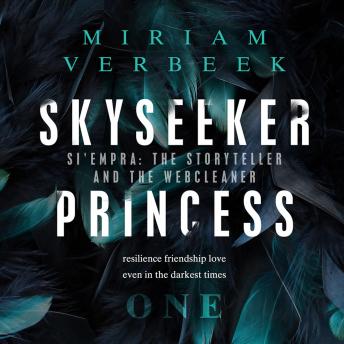 After everything she’s been through, is Ellen able to claim her birthright?

Ellen’s barely 18. She runs away from the palace and her abusive half-brother, the current leader of Skyseekers. Her faithful companion is the giant bird Rosa. Cryptal’s and Crystalmakers find her and take her to a place where there are other refugees. But there’s no safety among them. Though hunted and in constant danger, Ellen doesn’t forget she’s a king’s daughter. With cunning and audacity, she outwits her brother’s henchmen, negotiates deals with unsavoury privateers and comes to better understand the deep complexities of the Si’Empra world.

Ellen is lost in herself but she is confident of her birthright. In this first book of the Songs of Si’Empra series, Ellen takes the first steps towards control … though whether it is of herself or her destiny is still uncertain.

On Si'Empra there are two human (the Crystalmakers and Skyseekers) and one non-human society (Cryptals). They've existed together in harmony for thousands of years, each providing for another on one of the most inhospitable but beautiful islands on earth. All that changed when the island was discovered by foreigners and now Skyseekers want to introduce modern ways. But doing that will destroy the island ... or so Crystalmakers believe. Ellen is caught in the middle of a bloody battle between the two groups. It's a battle the Crystalmakers are losing and they are right: if Skyseekers win, then the island will cease to exist.

This title is due for release on April 15, 2019
We'll send you an email as soon as it is available!