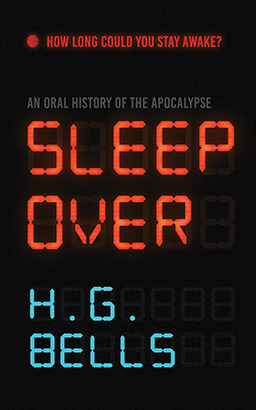 Sleep Over: An Oral History of the Apocalypse

For fans of the oral history genre phenomenon World War Z, a worldwide plague of insomnia creates a devastating new apocalypse.Remember what it's like to last an entire night without sleep? That dull but constant headache. The feeling of your brain on edge. How easily irritated you were. How difficult it was to concentrate, even on seemingly menial tasks.

It was just a single restless night, but everything felt just a little bit harder to do, and the only real comfort was knowing your head would finally hit the pillow at the end of the day, and when you awoke the next morning everything would return to normal.

But what if sleep didn't come the next night? Or the night after? What might happen if you, your friends and family, your coworkers, the strangers you pass on the street, all slowly began to realize that rest might not ever come again?How slowly might the world fall apart? How long would it take for a society without sleep to descend into chaos?

Sleep Over is collection of waking nightmares, a scrapbook of the haunting and poignant stories from those trapped in a world where the pillars of society are crumbling, and madness is slowly descending on a planet without rest.

Online vigilantism turns social media into a deadly gamble. A freelance journalist grapples with the ethics of turning in footage of mass suicide. A kidnapped hypnotist is held hostage by those at wit's end for a cure.In Sleep Over, these stories are just the beginning. Before the Longest Day, the world record was eleven days without sleep. It turns out most of us can go much longer.

Sleep Over: An Oral History of the Apocalypse