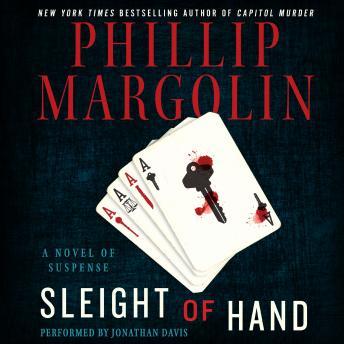 Sleight of Hand: A Novel of Suspense

Private investigator Dana Cutler must take down a cunning psychopath before he can pull off the perfect crime, in Sleight of Hand, a novel of suspense from Phillip Margolin, New York Times bestselling author of Capitol Murder and Supreme Justice.

Charles Benedict – charismatic criminal defense lawyer, amateur illusionist, and professional hit man – has performed his greatest sleight of hand yet: framing a millionaire for the murder of his much younger wife.

When Horace Blair married Carrie, the prosecutor in his DUI trial, he made her sign a prenuptial agreement guaranteeing her twenty million dollars if she remained faithful for the first ten years of marriage. Just one week before their tenth anniversary, Carrie disappears, and Horace is charged with her murder. Desperate to clear his name, the millionaire hires D.C.’s most ruthless defense lawyer – Charles Benedict.

P.I. Dana Cutler is in the Pacific Northwest on the trail of a stolen relic dating from the Ottoman Empire. Hitting a dead end sends her back to Virginia perplexed and disappointed – and straight into the case of Horace and Carrie Blair.

Now Dana must conjure a few tricks of her own to expose Benedict’s plot, before he can work his deadly magic on her...

Sleight of Hand: A Novel of Suspense