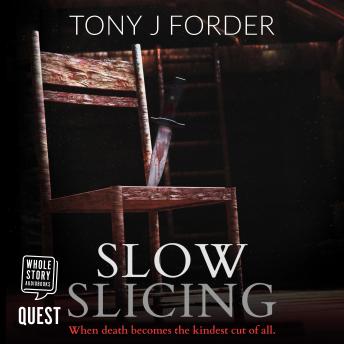 The bestselling author of the compelling DI Bliss crime series is back with another stunning novel.

WHEN DEATH BECOMES THE KINDEST CUT OF ALL

When slices of flesh and body parts are discovered in different areas of the country, DI Bliss and his team are tasked with running the operation. After Bliss realises the victims have been subjected to a specific form of torture, it leads him to a cold case involving the brutal and bloody murder of a woman in London twenty-six years earlier.

As the team discover links between their victims, the murdered woman, and gangland crime, they begin a dangerous investigation into both the past and the present. But Bliss is stumped, unable to decide if the current spate of mutilations are acts of revenge or the result of ageing criminals seeking to hide their despicable actions. Following a leak to the media, Bliss's reaction may have dire consequences.

With the hunt for the victims at fever point, Bliss uncovers evidence steering him in the direction of one particular individual. The only problem being, his prime suspect is the one person it cannot possibly be. When Bliss orders a sting operation, the astonishing truth is revealed. And that's when things really start to go wrong...

"I could almost smell and feel the fear due to the writing..."

"I believe this book deserves more than 5 stars and I highly recommend Slow Slicing as well as the other books in the series."

"The darkest of the Bliss books thus far, this will have your mind working overtime. Absolutely brilliant."

"Absolutely Chilling ...The best in the series ....Brilliant."

"Absolutely loved this and highly recommend it, as I do all the books in the Bliss series."

Reviews for other works in the DI Bliss series:

"The author is hugely talented and ranks, in my opinion, with the likes of Peter James and Val McDermid." Maggie James - bestselling author

"Just a word of warning - prepare to be in tears, on the edge of your seat and gobsmacked in equal measure. A triumph!" Liz Mistry - bestselling author

'Brilliantly written and a fascinating read that, in my opinion, could happily stand shoulder to shoulder with works from the likes of Rankin and Connelly.' Steve Robb - BookieWookie blogsite