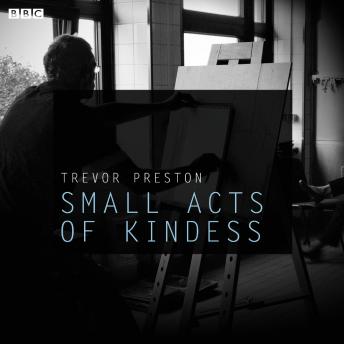 A BBC Radio 4 semi-autobiographical play by BAFTA award-winning writer Trevor Preston, telling the story of Charlie, who suddenly re-discovers the passion and energy of his youth. 'Small Acts of Kindness' was originally broadcast as the 'Afternoon Play' on 15 March 2011. In the late 1950s Charlie was a violent and uncontrollable entrant to art school. His teacher changed the course of his life. 'Small Acts of Kindness' catches up with Charlie as his mentor's death shifts everything once more. In his late sixties and with his writing career all but dried up, Charlie starts to paint again. Invigorated, he spends his free time supporting his contemporaries who have found themselves alienated and impoverished by modern life. Soon it is not just his desire to paint that is revived... Starring Stephen Greif as Charlie, and also featuring Ann Beach, Susan Penhaligon, Joanna Monro, Sean Baker, Gethin Anthony, Sally Orrock and Christine Kavanagh amongst the cast.