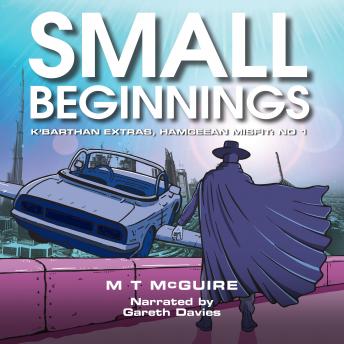 If trouble comes knocking, be out.

When your very existence is treason, employment opportunities are thin on the ground. But when one of the biggest crime lords in the city makes The Pan of Hamgee a job offer he can’t refuse, it’s hard to tell what the dumbest move is: accepting the offer or saying no to Big Merv. Neither will do much for The Pan’s life expectancy.

Q – So, what made you write this series?

A – If you want the honest answer I wrote it for me. I love British satire and humor (or humour). I love wit; funny epic fantasy series like the Discworld novels and comedic sci fi like Douglas Adams. I like a gripping tale that zips along quickly. And of course, I like genre fiction mashups; Douglas Adams meets StarTrek and James Bond - with a smidge of Dr Who and a dash of romance (but no squelchy bits). I wanted a fast paced story, a gripping tale but at the same time a funny one. Comedy in the tradition of all the great humorous British authors. I wanted protagonists people could love and empathise with, mavericks, misfit characters, real people ... except they're not all people obviously, some of them are other alien (ish) species. The Hamgeean Misfit series is science fiction fantasy action - it's planet based, so it's a bit of a blend. You'll find all sorts of quirky characters and interesting alien species: from 6ft Swamp Things with antennae to cute furry creatures like the Blurpons, with their fluffy ears, big button eyes and penchant for extreme violence.

This title is due for release on August 30, 2020
We'll send you an email as soon as it is available!