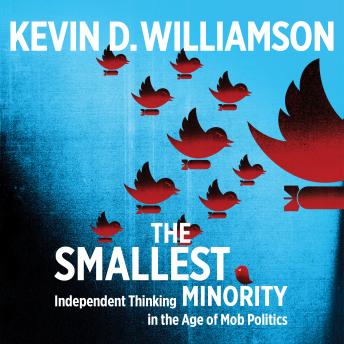 The Smallest Minority: Independent Thinking in the Age of Mob Politics

'The most profane, hilarious, and insightful book I've read in quite a while.' — BEN SHAPIRO
'Kevin Williamson's gonzo merger of polemic, autobiography, and batsh*t craziness is totally brilliant.' — JOHN PODHORETZ, Commentary
'Ideological minorities – including the smallest minority, the individual – can get trampled by the unity stampede (as my friend Kevin Williamson masterfully elucidates in his new book, The Smallest Minority).' — JONAH GOLDBERG
“The Smallest Minority is the perfect antidote to our heedless age of populist politics. It is a book unafraid to tell the people that they’re awful.” — NATIONAL REVIEW
'Williamson is blistering and irreverent, stepping without doubt on more than a few toes—but, then again, that’s kind of the point.' — THE NEW CRITERION
'Stylish, unrestrained, and straight from the mind of a pissed-off genius.' — THE WASHINGTON FREE BEACON
Kevin Williamson is 'shocking and brutal' (RUTH MARCUS, Washington Post), 'a total jack**s' (WILL SALETAN, Slate), and 'totally reprehensible' (PAUL KRUGMAN, New York Times).
Reader beware: Kevin D. Williamson—the lively, literary firebrand from National Review who was too hot for The Atlantic to handle—comes to bury democracy, not to praise it. With electrifying honesty and spirit, Williamson takes a flamethrower to mob politics, the “beast with many heads” that haunts social media and what currently passes for real life. It’s destroying our capacity for individualism and dragging us down “the Road to Smurfdom, the place where the deracinated demos of the Twitter age finds itself feeling small and blue.”
The Smallest Minority is by no means a memoir, though Williamson does reflect on that “tawdry little episode” with The Atlantic in which he became all-too-intimately acquainted with mob outrage and the forces of tribalism.
Rather, this book is a dizzying tour through a world you’ll be horrified to recognize as your own. With biting appraisals of social media (“an economy of Willy Lomans,” political hustlers (“that certain kind of man or woman…who will kiss the collective ass of the mob”), journalists (“a contemptible union of neediness and arrogance”) and identity politics (“identity is more accessible than policy, which requires effort”), The Smallest Minority is a defiant, funny, and terrifyingly insightful book about what we human beings have done to ourselves.

Smallest Minority: Independent Thinking in the Age of Mob Politics