So Brave, Young and Handsome 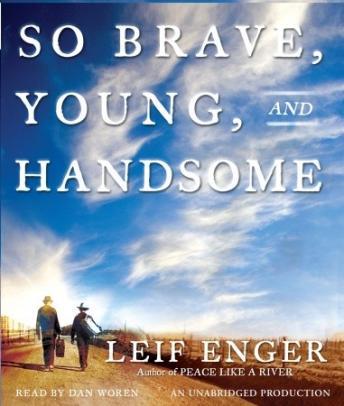 One of Time magazine’s top-five novels of the year and a New York Times bestseller, Leif Enger’s first novel, Peace Like a River, captured readers’ hearts around the nation. His new novel is a stunning successor–a touching, nimble, and rugged story of an aging train robber on a quest to reconcile the claims of love and judgment on his life, and the failed writer who goes with him.

In 1915 Minnesota, Monte Becket has lost his sense of purpose. His only success long behind him, Monte lives a simple life with his loving wife and whipsmart son. But when he befriends outlaw Glendon Hale, a new world of opportunity and experience presents itself.

Glendon has spent years in obscurity, but the guilt he harbors for abandoning his wife, Blue, over two decades ago, has finally lured him from hiding. As the modern age marches swiftly forward, Glendon aims to travel back into his past–heading to California to seek Blue’s forgiveness. Beguiled and inspired, Monte soon finds himself leaving behind his own family to embark for the unruly West with his fugitive guide–a journey that will test the depth of his loyalties, the inviolability of his morals, and the strength of his resolve. As they flee from the relentless Charles Siringo, an ex-Pinkerton who’s been hunting Glendon for years, Monte falls ever further from his family and the law, to be tempered by a fiery adventure from which he may never get home.

So Brave, Young and Handsome