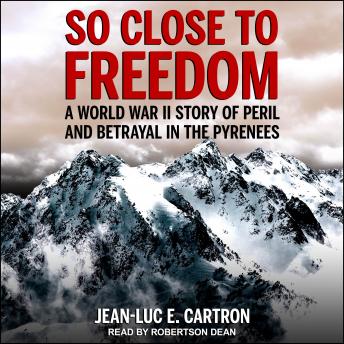 So Close to Freedom: A World War II Story of Peril and Betrayal in the Pyrenees

During World War II many escape-line organizations contributed to the Allied cause by funneling hundreds of servicemen trapped behind enemy lines out of occupied Europe. As the Germans tightened their noose around the escape lines and infiltrated them, the risk of discovery only grew for the servicemen who, in ever-increasing numbers, needed safe passage across the Pyrenees. In early 1944 two important escape-line organizations operated in Toulouse in southwestern France, handing over many fugitives to French passeur Jean-Louis Bazerque ('Charbonnier'). Along with several of his successful missions, Charbonnier's only failure as a passeur is recounted in gripping detail in So Close to Freedom.

This riveting story recounts how Charbonnier tried to guide a large group of fugitives-most of them downed Allied airmen, along with a French priest, two doctors, a Belgian Olympic skater, and others-to freedom across the Pyrenees. Tragically, they were discovered by German mountain troopers just shy of the Spanish border. Jean-Luc E. Cartron offers the first detailed account of what happened, showing how Charbonnier operated, his ties with 'the Françoise' (previously 'Pat O'Leary') escape-line organization, and how the group was betrayed and by whom.

So Close to Freedom: A World War II Story of Peril and Betrayal in the Pyrenees