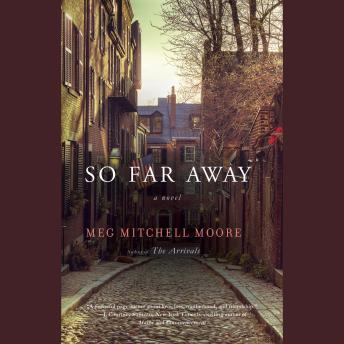 So Far Away: A Novel

Thirteen-year-old Natalie Gallagher is trying to escape: from her parents' ugly divorce, and from the vicious cyber-bullying of her former best friend. Adrift, confused, she is a girl trying to find her way in a world that seems to either neglect or despise her. Her salvation arrives in an unlikely form: Bridget O'Connell, an Irish maid working for a wealthy Boston family. The catch? Bridget lives only in the pages of a dusty old 1920s diary Natalie unearthed in her mother's basement. But the life she describes is as troubling -- and mysterious -- as the one Natalie is trying to navigate herself, almost a century later.

I am writing this down because this is my story. There were only ever two people who knew my secret, and both are gone before me.

Who was Bridget, and what became of her?

Natalie escapes into the diary, eager to unlock its secrets, and reluctantly accepts the help of library archivist Kathleen Lynch, a widow with her own painful secret: she's estranged from her only daughter. Kathleen sees in Natalie traces of the daughter she has lost, and in Bridget, another spirited young woman at risk.

What could an Irish immigrant domestic servant from the 1920s teach them both? As the troubles of a very modern world close in around them, and Natalie's torments at school escalate, the faded pages of Bridget's journal unite the lonely girl and the unhappy widow . . . and might even change their lives forever.

So Far Away: A Novel