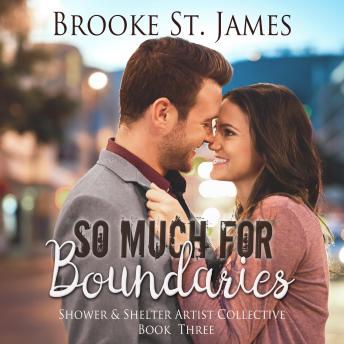 So Much for Boundaries: Shower & Shelter Artist Collective Book 3

Zoe Etheridge packed her bags and said goodbye to her small town Texas life. Her dad's dying wish was that she followed her dreams in New York City, and she was bound and determined to make that happen. It was only a day or so into her trip when she realized she might have bitten off more than she could chew.

Zoe assumed that the Shower & Shelter Artist Collective was open to any artist who needed a place to live in the city. She had no idea that landing a spot in the house was highly competitive, and seeing how she wasn't a formally trained artist, she wasn't quite sure how to compete.

She called the collective on her way into the city and spoke with the manager, Lane Alexander. He quickly made her realize she was in a David versus Goliath type situation, but decided to meet with her nonetheless. She knew she had to impress him when they met, but she assumed it would be with her unique approach to painting. It wasn't until she stared into his baby blues that she realized she wanted him to be impressed by more than just her art.