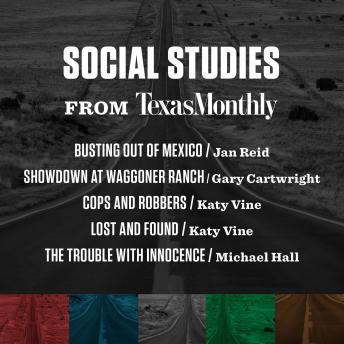 In partnership with Texas Monthly, the following articles focusing on Texas society are now available in a bundle as an audio download:

'Busting Out of Mexico' by Jan Reid details the unbelievable story of an eclectic group of Texans that broke Americans out of a Mexican jail.

'Showdown at Waggoner Ranch' by Gary Cartwright is the saga of the Waggoner family, and their fight over the inheritance of the second largest ranch in Texas.

'Cops and Robbers' by Katy Vine investigates the Panama Unit, a group of police officers tasked with cleaning up the drug trade along the Southern Texas and Mexico border who instead became a part of it.

'Lost and Found' by Katy Vine profiles the refugee community of Amarillo, Texas and one woman who volunteers to help them settle into their new lives.

'The Trouble with Innocence' by Michael Hall explores one man's journey through the Texas justice and prison system and asks how, after seeking innocence for 39 years, he could deny his own exoneration.