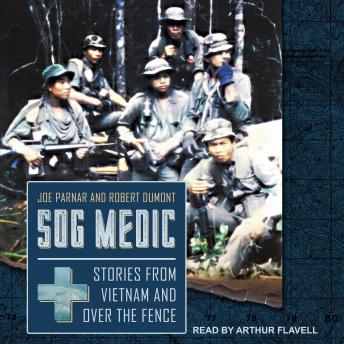 SOG Medic: Stories from Vietnam and Over the Fence

In the years since the Vietnam War, the elite unit known as SOG has spawned many myths, legends, and war stories. Special Forces medic Joe Parnar served with SOG during 1968 in FOB2/CCC near the tri-border area that gave them access to the forbidden areas of Laos and Cambodia. Parnar recounts his time with the recon men of this highly classified unit, as his job involved a unique combination of soldiering and lifesaving. His stories capture the extraordinary commitment made by all the men of SOG and reveal the special dedication of the medics, who put their own lives at risk to save the lives of their teammates. Parnar also discusses his medical training with the Special Forces.

During his tour with SOG, Parnar served as a dispensary medic, chase medic, Hatchet Force medic, and as a recon team member. This variety of roles gave him experience not only in combat but in dealing with and treating the civilians and indigenous peoples of that area. There is a graphic account of a Laotian operation involving America's most decorated soldier, Robert Howard, during which Parnar had to treat a man with a blown-off foot alongside nearly fifty other casualties. It is a reminder of the enormous responsibility and burden that a medic carried.