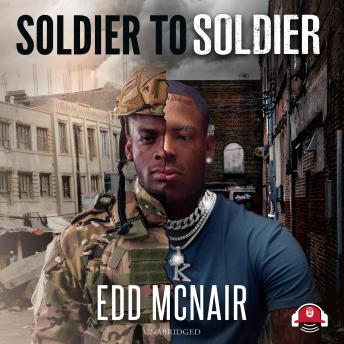 When a military soldier dies, everyone feels the pain. When a street soldier dies, only those close to him mourn. But both soldiers have something in common: they fought for what they believed in. Home from their final tour, a team from the 82nd Airborne Division out of Ft. Bragg, NC faces harsh realities: a broken relationship, the death of a child, and even the murder of one of their own. They quickly realize that whether you’re raised on a military base and trained in the military, or you come from the hard knocks of the projects and you are trained to go, a soldier is a soldier. Confident that their skills can be used on American soil to produce American dollars, these soldiers, armed with discipline, organization, and killer instincts began making moves on the streets. What they didn’t expect was to encounter a team of street soldiers who quickly teach them that on this concrete battlefield, the game is played with an entirely different set of rules. Edd McNair offers a compelling tale of the hardships soldiers face—whether they’re going to war to fight for their country or going to war on the inner-city streets. A soldier is a soldier and his life matters.