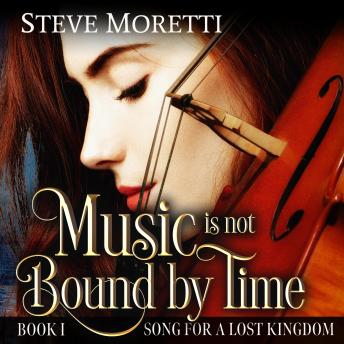 Song for a Lost Kingdom, Book I: Music is not bound by time

“What a page-turner.' - Lili Marcus.
It would take two women separated by time to make music with the power to change history.
Adeena Stuart and Katharine Carnegie were born nearly three centuries apart. Yet their music and an ancient cello connect them to each other and to a man doomed to die in 1746 after the Battle of Culloden.
In Book I of the Song for A Lost Kingdom series, Adeena receives an untitled musical score from her dying grandmother in Scotland. When the score is played on the oldest surviving cello ever made in the UK, the music connects Adeena directly to the past as Katharine, struggling to find words to complete her symphonic tour-de-force in the midst of the Scottish uprising uprising against Union with England.
But Adeena is not a scientist or historian. What she wants more than anything is to compose music and to join the National Arts Centre Orchestra in Ottawa. Just as she is about to realize her wish, she’s lifted away, out of her control, and immersed in her ancient family history. As she is buffeted back and forth between the worlds, she grows to want more of the past, even though the promise of her most yearned for dreams are coming true.
Not even her passionate boyfriend can keep her rooted in the present, especially when another man from the past falls for her and her music. Although unsure whether her time travel is a real or just an hallucination, she’s willing to steal a five million dollar cello to get back to the 18th century.
The audiobook version includes original music by Paul van Geldrop and Marc Moretti and a haunting vocal performance by soprano Ania Hejnar.
'Song For A Lost Kingdom swept me away..' - Jessica Rachow

Song for a Lost Kingdom, Book I: Music is not bound by time