The Song of All 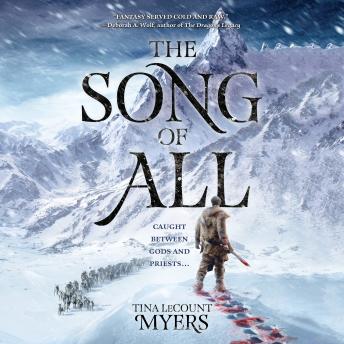 A former warrior caught between gods and priests must fight for the survival of his family in this dark epic fantasy debut, set in a harsh arctic world inspired by Scandinavian indigenous cultures. On the forbidding fringes of the tundra, where years are marked by seasons of snow, humans war with immortals in the name of their shared gods. Irjan, a human warrior, is ruthless and lethal, a legend among the Brethren of Hunters. But even legends grow tired and disillusioned.Scarred and weary of bloodshed, Irjan turns his back on his oath and his calling to hide away and live a peaceful life as a farmer, husband, and father. But his past is not so easily left behind. When an ambitious village priest conspires with the vengeful comrades Irjan has forsaken, the fragile peace in the Northlands of Davvieana is at stake.His bloody past revealed, Irjan's present unravels as he faces an ultimatum: return to hunt the immortals or lose his child. But with his son's life hanging in the balance, as Irjan follows the tracks through the dark and desolate snow-covered forests, it is not death he searches for, but life.