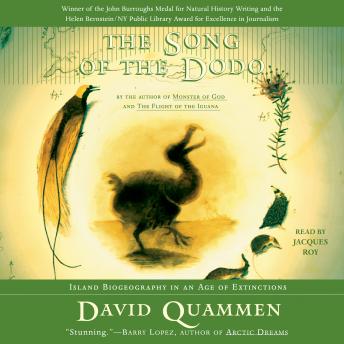 The Song of the Dodo: Island Biogeography in an Age of Extinctions

David Quammen's book, The Song of the Dodo, is a brilliant, stirring work, breathtaking in its scope, far-reaching in its message—a crucial book in precarious times, which radically alters the way in which we understand the natural world and our place in that world. It's also a book full of entertainment and wonders.

In The Song of the Dodo, we follow Quammen's keen intellect through the ideas, theories, and experiments of prominent naturalists of the last two centuries. We trail after him as he travels the world, tracking the subject of island biogeography, which encompasses nothing less than the study of the origin and extinction of all species. Why is this island idea so important? Because islands are where species most commonly go extinct—and because, as Quammen points out, we live in an age when all of Earth's landscapes are being chopped into island-like fragments by human activity.

Through his eyes, we glimpse the nature of evolution and extinction, and in so doing come to understand the monumental diversity of our planet, and the importance of preserving its wild landscapes, animals, and plants. We also meet some fascinating human characters. By the book's end we are wiser, and more deeply concerned, but Quammen leaves us with a message of excitement and hope.

Song of the Dodo: Island Biogeography in an Age of Extinctions