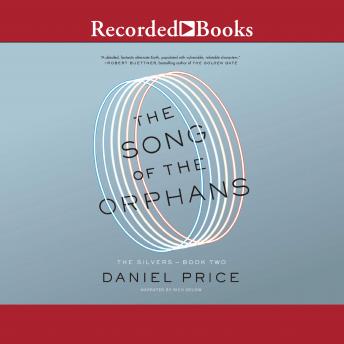 The Song of the Orphans

The second book in the genre-bending Silvers series-an io9 'can't miss' science fiction pick-about six extraordinary people whose fates become intertwined on an earth far different from our own. After their world collapsed in a sheet of white light, everything and everyone were gone-except for Hannah and Amanda Given. Saved from destruction by three fearsome and powerful beings, the Given sisters found themselves on a strange new Earth where restaurants move through the air like flying saucers and the fabric of time is manipulated by common household appliances. There, they were joined by four other survivors-a sarcastic cartoonist, a shy teenage girl, a brilliant young Australian, and a troubled ex-prodigy. Hunted by enemies they never knew they had, and afflicted with temporal abilities they never wanted, the sisters and their companions began a cross-country journey to find the one man who could save them. Now, only months after being pursued across the country by government forces and the Gothams-a renegade group with similar powers-the Silvers discover that their purpose on this unfamiliar Earth may be to prevent its complete annihilation. With continually shifting alliances and the future in jeopardy, the Silvers realize that their only hope for survival is to locate the other refugees-and determine whether they can be trusted or not.

.This was a wonderful sequel to Flight of the Silvers. I would have to say that I think I enjoyed this one more than the first. This one was both beautifully sweet and heartbreaking at the same time. There was a lot of intrigue, that left me saying "just one more chapter" till 3 in the morning, but what I enjoyed most is that the writer answered just enough along the way to make me to say "oh okay that makes sense. But the question now is why?" This book has enough new twists and turns, to make the story move along at a rapid pace, but not grow stale like "Well this has happened before how stupid can they actually be?" I also loved that the writer didn't end the book with a huge cliffhanger, yes there are A LOT of unanswered questions, and things I can't wait to find out, but he wrapped it up just enough for me to not be angry that I cannot find out the answers immediately. I hate books like that... No. I loved every moment of this book and I cannot wait for "War of the Givens" next year to find out how this AMAZING story ends.