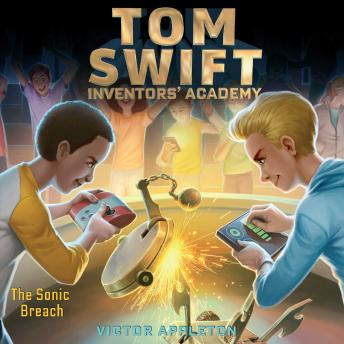 Tom gets to take all sorts of cool classes at the Swift Academy of Science and Technology, but robotics may be the one he is most excited for. Their teacher is holding a battling robot tournament, and Tom has to build a machine that will come out on top.

With the final battle coming up, Tom and his friends need as much time as possible to refine their masterpiece. But the rest of their teachers have been giving so many pop quizzes that they can barely focus in class, never mind concentrate on the tournament. Naturally, everyone is frustrated with the trend…until a mysterious new phone app appears. If students get pop quizzes during first period, they can warn everyone else about it by getting their phones to emit a high-pitched sound—a mosquito alarm—that adults can’t hear.

Tom is unsure about the whole thing, but it technically isn’t cheating, right? But when someone changes the app to break all the rules, the ethics aren’t debatable anymore. The longer the perpetrator remains unknown, the more harshly teachers treat all the students, and the pressure won’t stop until Tom and his friends track down the person behind the app takeover.