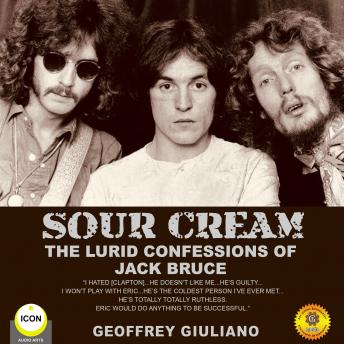 When author Geoffrey Giuliano and his wife, Vrnda Devi, met Jack Bruce and his lovely wife, Margaret, at the Savoy Hotel bar in London in 1994, they had no idea the kind of explosive, confessional, even lurid conversation they were about to have. What was supposedly a reasonably generic interview about the life and work of the great Mr. Bruce quickly turned into a haunting tirade on Jack's highly emotional, even hate-filled thoughts concerning his longtime musical colleague and Cream band member Eric Clapton.
The content of this bizarre, unexpected encounter is almost impossible to either express or comprehend. One must hear it to believe it. Wiping away the spin, promotion, legend, and myth, here is the real Jack Bruce - uncensored, unbridled, and frighteningly frank about the fabled British guitarist fans once referred to as "God". A must for all serious collectors of 1960s memorabilia as well as pop historians, music scholars, fans, and all university and school systems.
Series producer Avalon Giuliano in New York
Produced by Alex Franchi in Milan
Edited and mixed by Macc Kay in Bangkok
ICON intern Eden Giuliano
Music by AudioNautix