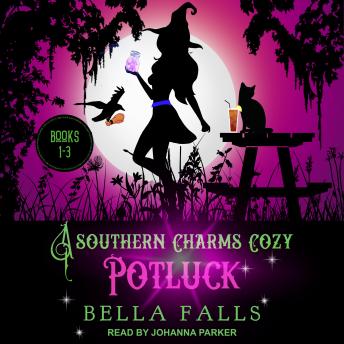 Moonshine & Magic: Charli Goodwin finds herself at the center of a mystery that threatens the very foundations of Honeysuckle Hollow and the safety of every paranormal citizen in it-starting with Charlie herself. With the clock ticking, will Charli's special magical talents be enough to save not only the town but her own life?

Fried Chicken & Fangs: When an outspoken resident who opposes the changes to the magical small Southern town turns up dead, it's up to Charli Goodwin and her special talents to get on the case . . . except her valuable magic doesn't seem to be working. Will Charli be able to figure out who is pulling the strings before the foundations of the town are destroyed?

Sweet Tea & Spells: Lots of changes in town and in her life, including her ex-fiance's upcoming wedding to her cousin, have Charli Goodwin trying to be on her best behavior. But when an outsider infiltrates Honeysuckle and another death threatens to ruin more than just the future of the upcoming nuptials, Charli winds up at the center of another murder investigation.