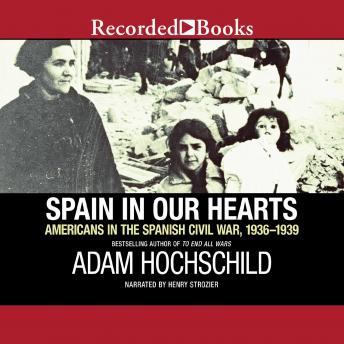 From the acclaimed, best-selling author Adam Hochschild, a sweeping history of the Spanish Civil War, told through a dozen characters, including Ernest Hemingway and George Orwell: a tale of idealism, heartbreaking suffering, and a noble cause that failed For three crucial years in the 1930s, the Spanish Civil War dominated headlines in America and around the world, as volunteers flooded to Spain to help its democratic government fight off a fascist uprising led by Francisco Franco and aided by Hitler and Mussolini. Today we're accustomed to remembering the war through Hemingway's For Whom the Bell Tolls and Robert Capa's photographs. But Adam Hochschild has discovered some less familiar yet far more compelling characters who reveal the full tragedy and importance of the war: a fiery nineteen-year-old Kentucky woman who went to wartime Spain on her honeymoon, a Swarthmore College senior who was the first American casualty in the battle for Madrid, a pair of fiercely partisan, rivalrous New York Times reporters who covered the war from opposites sides, and a swashbuckling Texas oilman with Nazi sympathies who sold Franco almost all his oil - at reduced prices, and on credit. It was in many ways the opening battle of World War II, and we still have much to learn from it. Spain in Our Hearts is Adam Hochschild at his very best.