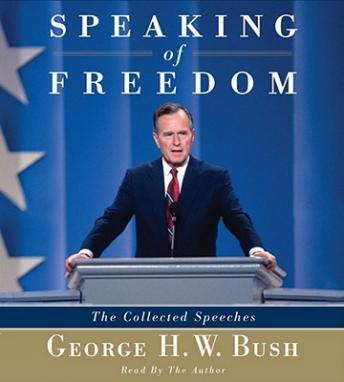 Coinciding with the twentieth anniversary of his inauguration and the commission of the USS George H.W. Bush, a collection of the forty-first president’s speeches.

Here, in his own words, is the record of George H.W. Bush’s presidency. Chosen and annotated by former President Bush, these forty-two speeches reflect his concerns, his political philosophy, and the triumphs and challenges of his years in office. Whether accepting the nomination, speaking to the Armed Forces in the Persian Gulf, presenting Presidential Citations to Joe DiMaggio and Ted Williams, or marking the 50th anniversary of Pearl Harbor, these speeches, great and small, defined the first Bush years.

Marking significant events in world history, including the fall of the Berlin Wall, the collapse of communism in the Soviet Union, and U.S. military action against Iraq, this collection documents a transformative period in world history and the voice and politics of one of our great leaders.