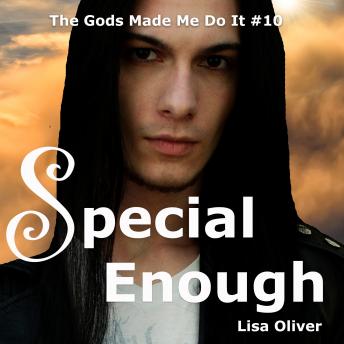 If life were a sh*t sandwich, Evan Parker would be buried in a buffet of dung. Half wolf shifter, half magic user, he hasn’t come into his powers yet, although his aunt who he lives with, assures him it’s only a matter of time. Evan hasn’t got a clue what difference having powers will make. He can barely talk, he has post-it notes and lists around his apartment to help him function, and his wolf form is as mute as he is. Combine that with the necklace of scars that cover his neck, and Evan knows he has nothing to offer any guy, let alone a mate… or does he?

Odin, Norse god, know-it-all and overly curious person, knows who Evan is to him. Rather than dismiss his vision, Odin changes his appearance, masks his scent and goes digging into Evan’s life to find out what makes him so special. It had to be something amazing, otherwise the Norns (Fates) wouldn’t have picked the young wolf to be his companion for eternity. The more Odin sees, the more he likes…

It should’ve been a straightforward mating, but it wasn’t. A local coven has Evan on their agenda. Odin’s wolves get overly playful. Then there’s the lovely Frigg, who the coven believes is Odin’s wife, hanging around yelling 'O.M.G', and that’s without considering how Thor and Loki might feel about the whole situation. Dead warriors arm wrestling, talking ravens, did I mention the demon? What more does this story need except an HEA.

This book is part of a series but can definitely be read as a standalone. It involves a spot of violence, a bit of swearing, and intimate situations between men which should only be read by adults.

This title is due for release on May 8, 2021
We'll send you an email as soon as it is available!