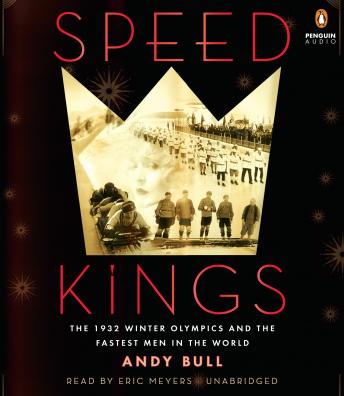 Speed Kings: The 1932 Winter Olympics and the Fastest Men in the World

A story of risk, adventure, and daring as four American bobsledders race for the gold in the most dangerous competition in Olympic history.

In the 1930s, as the world hurtled toward war, speed was all the rage. Bobsledding, the fastest and most thrilling way to travel on land, had become a sensation. Exotic, exciting, and brutally dangerous, it was the must-see event of the 1932 Winter Olympics at Lake Placid, the first Winter Games on American soil. Bobsledding required exceptional skill and extraordinary courage—qualities the American team had in abundance.

There was Jay O’Brien, the high-society playboy; Tippy Grey, a scandal-prone Hollywood has-been; Eddie Eagan, world champion heavyweight boxer and Rhodes Scholar; and the charismatic Billy Fiske, the true heart of the team, despite being barely out of his teens. In the thick of the Great Depression, the nation was gripped by the story of these four men, their battle against jealous locals, treacherous U.S. officials, and the very same German athletes they would be fighting against in the war only a few short years later. Billy, king of speed to the end, would go on to become the first American fighter pilot killed in WWII. Evoking the glamour and recklessness of the Jazz Age, Speed Kings will thrill readers to the last page.

Thoroughly enjoyed the listening with lots of great anecdotes about not just the origins of bobsledding, but also the Winter Olympics and the 1932 games. Also, a nice period piece for the stretch between the two World Wars with the device of Billy Fisk's crash landing in the Hawker Hurricane an effective open and close. I did think that the narrator did a superb job of capturing the irreverence of the Roaring Twenties and characterizations consistent and engaging. Found myself driving a few extra blocks just to finish certain sections like the final runs in Lake Placid, etc.!