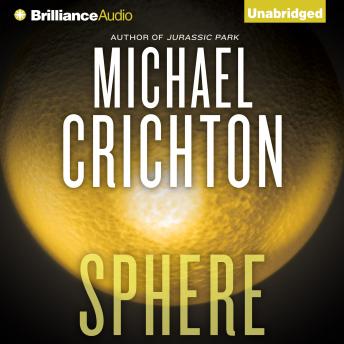 "Crichton keeps us guessing at every turn in his best work since The Andromeda Strain." -Los Angeles Times

"Sphere may be Crichton's best novel, but even if it ranked only second or third, it would be a must for suspense fans." -Miami Herald

A classic thriller from #1 New York Times bestselling author Michael Crichton, Sphere is a bravura demonstration of what he does better than anyone: riveting storytelling that combines frighteningly plausible, cutting-edge science and technology with pulse-pounding action and serious chills. The gripping story of a group of American scientists sent to the ocean floor to investigate an alien ship, only to confront a terrifying discovery that defies imagination, Sphere is Crichton prime-truly masterful fiction from the ingenious mind that brought us Prey, State of Fear, and Jurassic Park.

Sphere was made into a film directed by Barry Levinson, which starred Dustin Hoffman, Sharon Stone, and Samuel L. Jackson.