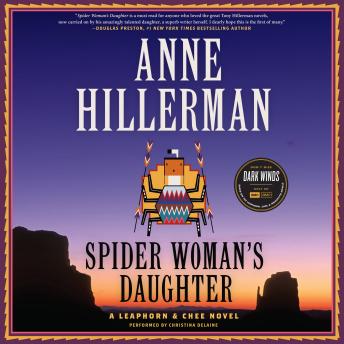 Legendary tribal sleuths Leaphorn and Chee are back!
The supremely talented daughter of New York Times bestselling author Tony Hillerman continues his popular series with this fresh, new mystery-her debut novel-filled with captivating lore, startling suspense, bold new characters, vivid color, and rich atmosphere.
It happened in an instant: After a breakfast with colleagues, Navajo Nation Police Officer Bernadette Manuelito sees a sedan career into the parking lot and hears a crack of gunfire. When the dust clears, someone very close to her is lying on the asphalt in a pool of blood.
With the victim in the hospital fighting for his life, every person in the squad and the local FBI office is hell-bent on catching the gunman. Bernie, too, wants in on the investigation, despite regulations strictly forbidding eyewitness involvement. Her superior may have ordered her to take some leave, but that doesn't mean she's going to sit idly by, especially when her husband, Sergeant Jim Chee, is put in charge of finding the shooter.
Pooling their skills, Bernie and Chee discover that a cold case involving Chee's former boss and partner, retired lieutenant Joe Leaphorn, may hold the key to the shooting. Digging into the old investigation with discriminating eyes and a fervent urgency, husband and wife find themselves inching closer to the truth with every clue . . . and closer to a killer who will do anything to prevent justice from taking its course.