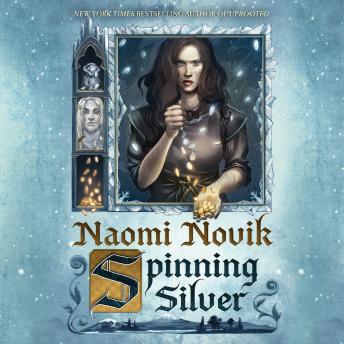 NEW YORK TIMES BESTSELLER • “One of the year’s strongest fantasy novels” (NPR), an imaginative retelling of the Rumpelstiltskin fairy tale from the bestselling author of Uprooted.

NEBULA AND HUGO AWARD FINALIST • NAMED ONE OF PASTE’S BEST FANTASY BOOKS OF THE DECADE • ONE OF THE TEN BEST BOOKS OF THE YEAR: The New York Public Library

With the Nebula Award–winning Uprooted, Naomi Novik opened a brilliant new chapter in an already acclaimed career, delving into the magic of fairy tales to craft a love story that was both timeless and utterly of the now. Spinning Silver draws readers deeper into this glittering realm of fantasy, where the boundary between wonder and terror is thinner than a breath, and safety can be stolen as quickly as a kiss.

Miryem is the daughter and granddaughter of moneylenders, but her father’s inability to collect his debts has left his family on the edge of poverty—until Miryem takes matters into her own hands. Hardening her heart, the young woman sets out to claim what is owed and soon gains a reputation for being able to turn silver into gold. When an ill-advised boast draws the attention of the king of the Staryk—grim fey creatures who seem more ice than flesh—Miryem’s fate, and that of two kingdoms, will be forever altered. She will face an impossible challenge and, along with two unlikely allies, uncover a secret that threatens to consume the lands of humans and Staryk alike.

“A perfect tale . . . A big and meaty novel, rich in both ideas and people, with the vastness of Tolkien and the empathy and joy in daily life of Le Guin.”—The New York Times Book Review

“Gorgeous, complex, and magical . . . This is the kind of book that one might wish to inhabit forever.”—Publishers Weekly (starred review)

“Cool and clever and . . . dire and wonderful.”—Laini Taylor, author of Strange the Dreamer

“The Rumpelstiltskin fairy tale has never been as captivating. . . . Spinning Silver further cements [Novik’s] place as one of the genre greats.”—Paste

Loved everything about both the book and the narration.

Good book. Had a good laugh as the Ice King was bound and determined to consummate his wedding but didn’t want to. Glad they reached a bargain. The narrator was good but many characters were being introduced and really had to listen to hear which one was speaking at the time. Very little change in voice with different characters.

Another wonderful book by Naomi Novak! I was not as drawn to the main character this time as I was with her last book Uprooted but I felt like I was back in the universe she is creating with each story! I still would recommend this book to all my friends regardless.

Loved the Slavik folk tale, the winter lord and his white deer with silver hooves, the witch's house in the middle of dark forest where you can only find by stumbling upon it were always among my childhood favorites. Took a star off for that bicker-y correspondence between Miriam and Staryk lord for it's cheesiness worth for Twilight series. Other than that, very refreshing story among overly sweetened Disney like fantasies you see nowadays.

I got lost in the fantasy and didn't want to stop listening. I enjoyed the way the story was told through the eyes of different characters.

I loved it right up to the last word and wished there were more words coming.

Was there an editor for the audio? I never knew when a chapter change happened and with the narrative being in the first person for multiple characters, I was always jarred into noticing the change of view.