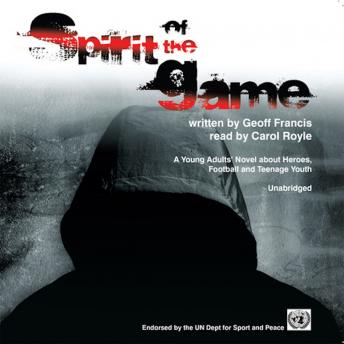 Spirit of the Game

A contemporary story about heroes, football and how a teenage youth eventually comes to reject the image of a modern day role model in favour of the reality of one from an earlier time. Through the story threads a theme which haunts and threatens the modern game of soccer. Racism and hooliganism rip at the heart of Jamie's family infiltrating and disrupting not only daily life but society as a whole.
At the centre of the story is the life, and love story of probably the games greatest ever ambassador. (Sir) Stanley Mathews. The man of whom Pele said "He taught us how to play". The man who truly embodied the spirit of the game passes it on to a new generation.
Endorsed by Desmond Tutu and the United Nations Department for Sport and Peace.
Narrator: Carol Royle
A consummate actress on stage soon after joining the Royal Shakespeare Company she won the London Drama Critic's Award for Ophelia in Michael Pennington's acclaimed Hamlet. Carol became famous in Britain as Jenny Russell in the BBC sitcom Life Without George which ran for three series on British television. Her other TV work has included Heartbeat, Blake's 7, The Professionals, Bergerac, Cribb, Crossroads, The Outsider, Casualty, The Cedar Tree, Ladies in Charge, Crime Traveller, The Bill and Doctors. Her film career includes roles in The Greek Tycoon and Tuxedo Warrior and she played the
prominent role of Jessica in Blackeyes written by Dennis Potter.

Spirit of the Game