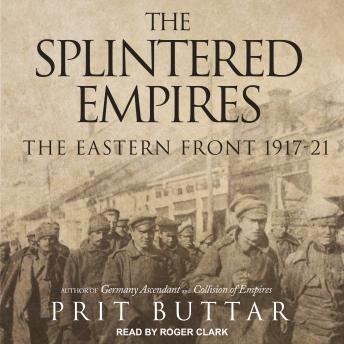 The Splintered Empires: The Eastern Front 1917-21

At the beginning of 1917, the three empires fighting on the Eastern Front were reaching their breaking points, but none was closer than Russia. After the February Revolution, Russia's ability to wage war faltered and her last desperate gamble, the Kerensky Offensive, saw the final collapse of her army. This helped trigger the Bolshevik Revolution and a crippling peace, but the Central Powers had no opportunity to exploit their gains and, a year later, both the German and Austro-Hungarian empires surrendered and disintegrated.

Concluding his acclaimed series on the Eastern Front in World War I, Prit Buttar comprehensively details not only these climactic events, but also the 'successor wars' that raged long after the armistice of 1918. New states rose from the ashes of empire and war raged as German forces sought to keep them under the aegis of the Fatherland. These unresolved tensions between the former Great Powers and the new states would ultimately lead to the rise of Hitler and a new, terrible world war only two decades later.

Superb in every way, and Clark’s baritone narration is appropriately dramatic. A great expose of a part of the Great War that is not much written about!