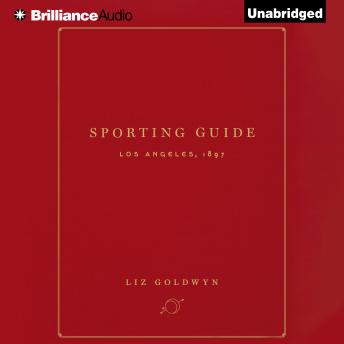 A brilliantly imaginative recreation of an 1890s Los Angeles pocket guide, or 'Sporting Guide,' to the brothels of the day.

Before there was the glitz and glamour of Hollywood, Los Angeles was a rough place, building its way out to the global city of today. In the late nineteenth century it was a rapidly growing city filled with pimps and prostitutes, Chinese railwaymen, robbers, smugglers, and corrupt politicians. It was a city where losers and dreamers from all over the world could came to make their fortune.

This era of her native city has always fascinated author, fashion icon, and filmmaker Liz Goldwyn. In a series of beautiful, haunting interlinked stories she recreates the Los Angeles of the 1890s through stories of its pimps, politicians, prostitutes—male and female—businessmen, madams, and johns. She takes listeners inside the bordellos and velvet curtained rooms where sex entices but power and money rule. Based on her original research in the libraries and archives of LA, these fictional stories center around real historical characters—like the famous owner of LA’s grandest brothel, Pearl Morton (whose tombstone Goldwyn discovered). Interspersed in those stories, Goldwyn writes about the historical realities of the time, from fashion to opium drug addiction to sexual practices and birth control.

Sporting Guide evokes a lost world of those on the margins of LA, of the hustlers who made it into one of the great cities of the world, and she gives a poignant voice to people and stories lost to time.