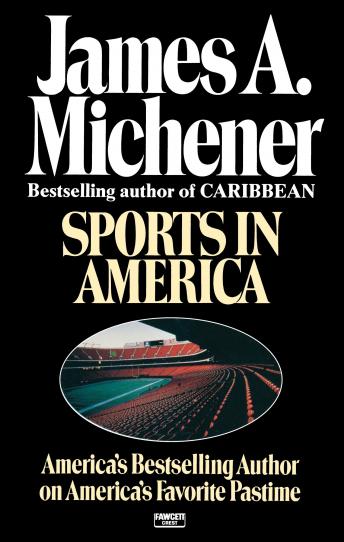 Originally published in 1976, James A. Michener’s explosive, spectacular Sports in America is a prescient examination of the crisis in American sports that is still unfolding to this day. Pro basketball players are banned for narcotics use, while a Major League pitcher is arrested for smuggling drugs across the Mexican border. The NFL’s “injury report” grows longer every Sunday. Corruption and recruiting violations plague collegiate sports as the “winning is everything” mentality trickles down to the Little League level. With his lifelong enthusiasm for sports in evidence, the incomparable Michener tackles this subject thoroughly and leaves us amazed and appalled by what we’ve learned, yet still loving the games we grew up on.

Praise for Sports in America

“A comprehensive, controversial examination of sports as a major force in American life.”—Los Angeles Times

“Michener’s life was saved by sports twice. In return, he has issued a long, lovingly critical, prodigiously researched account of the passions and politics of America at organized play. Rich in anecdote, source material and his own shrewd commentary.”—The New York Times Book Review

“Like just about everything James Michener has produced, Sports in America is a thoughtful, well-written document that’s thoroughly researched. . . . For anyone interested in how the ball bounces in the U.S. of A., the answers are all here.”—The Wall Street Journal