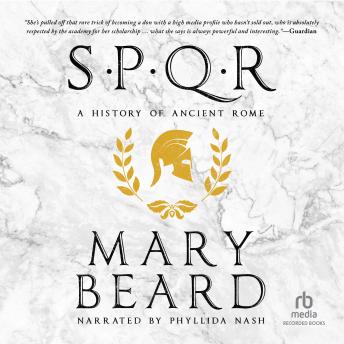 SPQR: A History of Ancient Rome

A sweeping, revisionist history of the Roman Empire from one of our foremost classicists. Ancient Rome was an imposing city even by modern standards, a sprawling imperial metropolis of more than a million inhabitants, a 'mixture of luxury and filth, liberty and exploitation, civic pride and murderous civil war' that served as the seat of power for an empire that spanned from Spain to Syria. Yet how did all this emerge from what was once an insignificant village in central Italy? In S.P.Q.R., world-renowned classicist Mary Beard narrates the unprecedented rise of a civilization that even two thousand years later still shapes many of our most fundamental assumptions about power, citizenship, responsibility, political violence, empire, luxury, and beauty. From the foundational myth of Romulus and Remus to 212 cenearly a thousand years laterwhen the emperor Caracalla gave Roman citizenship to every free inhabitant of the empire, S.P.Q.R. (the abbreviation of 'The Senate and People of Rome') examines not just how we think of ancient Rome but challenges the comfortable historical perspectives that have existed for centuries by exploring how the Romans thought of themselves: how they challenged the idea of imperial rule, how they responded to terrorism and revolution, and how they invented a new idea of citizenship and nation. Opening the book in 63 bce with the famous clash between the populist aristocrat Catiline and Cicero, the renowned politician and orator, Beard animates this 'terrorist conspiracy,' which was aimed at the very heart of the Republic, demonstrating how this singular event would presage the struggle between democracy and autocracy that would come to define much of Rome's subsequent history. Illustrating how a classical democracy yielded to a self-confident and self-critical empire, S.P.Q.R. reintroduces us, though in a wholly different way, to famous and familiar charactersHannibal, Julius Caesar, Cleopatra, Augustus, and Nero, among otherswhile expanding the historical aperture to include those overlooked in traditional histories: the women, the slaves and ex-slaves, conspirators, and those on the losing side of Rome's glorious conquests. Like the best detectives, Beard sifts fact from fiction, myth and propaganda from historical record, refusing either simple admiration or blanket condemnation. Far from being frozen in marble, Roman history, she shows, is constantly being revised and rewritten as our knowledge expands. Indeed, our perceptions of ancient Rome have changed dramatically over the last fifty years, and S.P.Q.R., with its nuanced attention to class inequality, democratic struggles, and the lives of entire groups of people omitted from the historical narrative for centuries, promises to shape our view of Roman history for decades to come.

This felt like a College lecture. I really enjoy Roman history but this was dry & bounced around a lot with no real cohesion or story. I really wanted to be pulled in by the author but I kept being disappointed. She doesn't dwell on one subject i.e., Caesar for very long or discuss their conquests for example. It just bounces around with no feeling either way. I felt like I was in the back of my classroom again but falling asleep.

What an awful waffle of a quaffle. Pick a position, professor Beard! The author takes the most interesting history perhaps ever and makes it dull. She outlines what is known or said, and then casts doubt on this evidence over and over again. Sometimes it seems justified; sometimes I was just mystified. Other history professors might find this interesting, yet a layperson like me will likely find it pedantic and dull. Skip this one- it’s a torture.

If you would like to waste a lot of time and learn absolutely nothing about Roman history this is the perfect book. It’s a confused jumble of “what if, I wonder, do you think maybe, and we just don’t know “.

Excellent research and so many myths explained in a manner that was digestible and even entertaining. Fantastic narration. I love history and love it even more when it is uncovered by brilliant people like Mary Beard

Absolutely no one is as gifted in telling Rome's ancient history like Mary Beard, she's a gift to humanity. Excellent Narration!

This title is due for release on November 9, 2015
We'll send you an email as soon as it is available!