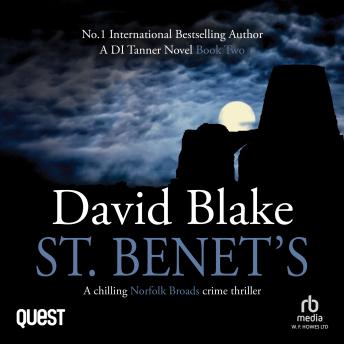 St. Benet's is a gripping crime thriller, the second in a chilling series of serial killer books, ones which will rapidly convert followers of Faith Martin, Joy Ellis and Damien Boyd into David Blake devotees.

When the body of an old man is found lying in the ruins of St Benet's Abbey, his throat cut, a knife resting in his open hand, DI John Tanner and DC Jenny Evans are given no choice but to accept a ruling of death by misadventure. But when the body goes missing from its tomb, after a priest is found nailed to a cross, and another impaled on a stake, everything begins to point back to the murder of a teenage girl, thrown from the top of a church tower, some forty-three years before. Set within the mysterious beauty of the Norfolk Broads, this fast-paced British detective series is a murder mystery with a slice of humour and a touch of romance, one that will have you guessing until the very end.