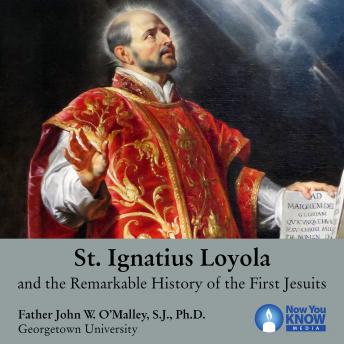 St. Ignatius Loyola and the Remarkable History of the First Jesuits

As the Society of Jesus approaches its 500th anniversary, the Jesuits make up the largest unified religious order of men in the Catholic Church. How did these"Soldiers of Christ" grow from their humble beginnings to become an order deeply engaged in ministries, learning, and society in 112 nations on all six inhabited continents?

Whether you are a Jesuit yourself or a person touched by Jesuit education, ministries, and writings, you will love this course. Fr. O'Malley, one of the world's leading Catholic historians, is at his best in these lectures. You will gain a broad, insightful overview of early Jesuit history with a special focus on the first generation of Jesuits, whose piousness has inspired countless men and women to follow in their footsteps.

The Society began amongst the tumults of the 16th century, the dramatic age of the Renaissance and the Reformation. In the midst of this chaotic era, we find the remarkable life and vision of one inimitable man: Ignatius of Loyola. A Spanish Basque aristocrat and wounded ex-soldier, he led fellow students from the University of Paris to win papal approval for their new religious order in 1540. By the time Ignatius died in 1556, his Jesuits were one thousand members strong and growing. They were all guided by his extraordinary Spiritual Exercises, a book drawn from his own life journey of prayer and reflection in search of God's will and blessing.

Discover the roots of one of the modern world's most influential and vibrant institutions.

St. Ignatius Loyola and the Remarkable History of the First Jesuits

This title is due for release on September 13, 2007
We'll send you an email as soon as it is available!