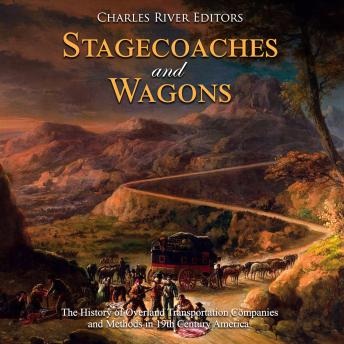 Stagecoaches and Wagons: The History of Overland Transportation Companies and Methods in 19th Century America

The United States is a massive country, with the continental 48 states covering over three million square miles. From the 13 colonies along the Atlantic Ocean, the nation spread ever westward, and before automobiles, airplanes, and railroads, the most reliable transportation was one's own two feet or a horse.
Wagons, whether covered or uncovered, have been used to haul people and supplies for centuries. Roman armies marched with mule-powered wagons, and the Hussites utilized them to form defensive works in warfare.
By the time the United States came into existence, wagons were a tried and true method of transportation, and to that end, men and their families expanded westward in wagons and stagecoaches, the automobiles of the era. Driven by oxen, horses, or mules, wagons and stagecoaches allowed people to traverse long distances much faster than walking, and although this form of travel remained relatively slow and perilous, the journey was often considered worth the risk. Some saw the potential profits in moving to the frontier, and as the nation expanded, enterprising individuals sought to form companies dedicated to stagecoach travel.
In fact, trails would be forged across the country to help spread settlers, and the westward movement of Americans in the 19th century became one of the largest and most consequential migrations in history. Among the paths that blazed west, the most well-known is the Oregon Trail, which was not a single trail but a network of paths that began at one of four "jumping off" points. These trails branched off at various points and stretched roughly half the country, and hundreds of thousands of settlers would use it, yet the Oregon Trail is famous not so much for its physical dimensions but for what it represented. As many who used the Oregon Trail described in memoirs, the West represented opportunities for adventure, independence, and fortune.

Stagecoaches and Wagons: The History of Overland Transportation Companies and Methods in 19th Century America