STALIN: The Man of Steel 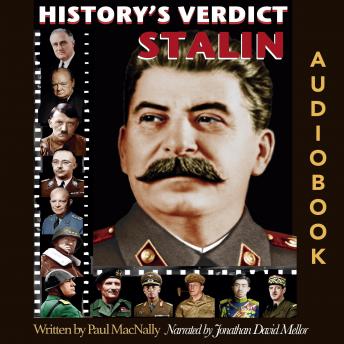 Via stunning contemporary footage, freshly declassified discoveries, a brilliant script, insights from the greatest historians of the past seventy years and the unforgettable words of the dictator himself and the people who knew him best, we deliver History’s Verdict on Stalin.

Opening with the colossal Nazi invasion of the U.S.S.R., we show how Stalin himself almost helped Hitler to conquer the Soviet Union in the first few weeks of Barbarossa. How his paranoia regarding his own commanders and potential allies blinded him to Hitler’s plans. How his attempts to appease Hitler failed. And his lack of leadership in the disastrous opening stages of the campaign.

We then witness his resolution to resist the invaders and how he inspired his people to virtually superhuman acts of bravery. However, we also see his utter ruthlessness in terrorising his subjects into facing Nazi atrocities, too.

Stalin’s own contributions to the decisive battles of the eastern Front – Moscow, Stalingrad and Kursk – are analysed, as well as the role of Zhukov, the weather and Siberian troops in saving the U.S.S.R.

We show how Stalin was frequently able to dominate his partners in “The Big Three” – Churchill and Roosevelt – and we look at his merciless treatment of enemies – the Germans – but also so-called allies – the Poles.

We reveal how the complex psychology of the man – with vast talents existing alongside monstrous flaws - was crucial to victory. And we examine his ambivalent legacy and how it haunts the former Soviet Union to this day.

STALIN: The Man of Steel