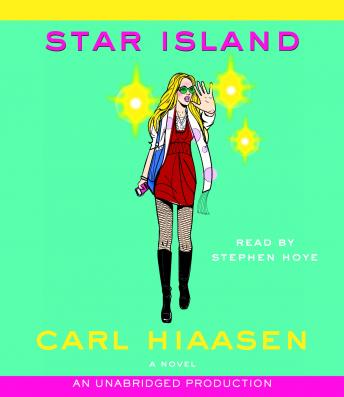 A hilarious spin on life in the celebrity fast lane from “Florida’s most entertainingly indignant social critic” (New York Times Book Review) and the bestselling author of Squeeze Me.

Meet twenty-two-year-old Cherry Pye (née Cheryl Bunterman), a pop star since she was fourteen—and about to attempt a comeback from her latest drug-and-alcohol disaster.

Now meet Cherry again: in the person of her “undercover stunt double,” Ann DeLusia. Ann portrays Cherry whenever the singer is too “indisposed”—meaning wasted—to go out in public. And it is Ann-mistaken-for-Cherry who is kidnapped from a South Beach hotel by obsessed paparazzo Bang Abbott.

Now the challenge for Cherry’s handlers (über–stage mother; horndog record producer; nipped, tucked, and Botoxed twin publicists; weed whacker–wielding bodyguard) is to rescue Ann while keeping her existence a secret from Cherry’s public—and from Cherry herself.

The situation is more complicated than they know. Ann has had a bewitching encounter with Skink—the unhinged former governor of Florida living wild in a mangrove swamp—and now he’s heading for Miami to find her….

Will Bang Abbott achieve his fantasy of a lucrative private photo session with Cherry Pye? Will Cherry sober up in time to lip-synch her way through her concert tour? Will Skink track down Ann DeLusia before Cherry’s motley posse does?