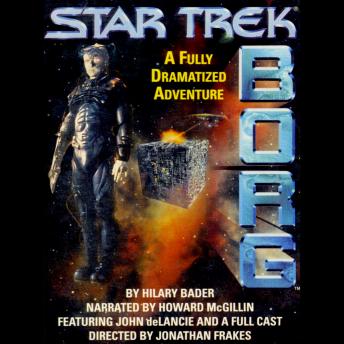 In this thrilling adventure, you will be dropped deep into
another spectacular culture - the Borg, the strange and powerful
race eager to assimilate the Federation.

Cadet Qaylan Furlong's father was killed by the Borg in the
battle of Wolf 359. Now, ten years later, the Borg are attacking
again, and Starfleet won't allow Cadet Furlong to stay aboard the
Starship Cheyenne to avenge his father's death - but Q
will. He'll do better than that, in fact, taking the cadet back
in time ten years and putting Qaylan on the same ship as his
father to give him a chance to save him - and the entire
Federation - on a mission of extreme danger, difficult choices,
and surprising results.

John deLancie (in his role as 'Q') headlines a
Star Trek cast and crew in this chilling experience of the
future and the adventures of the heroic Starfleet officer who
must save the Federation!