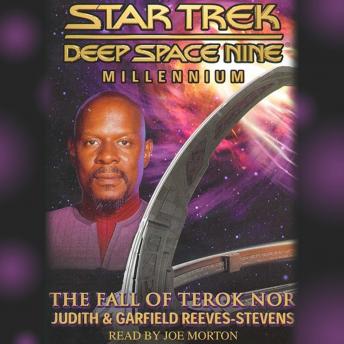 Welcome, Emissary.
As Benjamin Sisko picked his way over the wreckage that was his new command, a thousand questions, countless problems, dire reports, and the soon-to-be-familiar harangue of the Bajoran Liaison Officer clamored for his attention. From the shadows, a monk stepped out and greeted him. With all that had happened, it is no small wonder that Sisko took that greeting and relegated it to the back of his mind.
Six years have passed. Despite the recent retaking of Deep Space 9™, it seems that the Federation is losing the Dominion war. As commander of a front-line post, Sisko focuses on the war effort, paying little attention to the latest rumor. 'The fabled lost Orbs of the Prophets have been recovered. Legend holds that these orbs are the key to unlocking a second wormhole -- a second Celestial Temple.' In war, sometimes the little things you don't notice are your undoing.
Now Benjamin Sisko, a man of science and a Starfleet officer -- and also the Emissary -- is swept up in the ultimate war of good versus evil. Every decision he makes draws him, his family, and his crew into the abyss. Faced with the possibility that he alone must decide the fate of life in the galaxy, Captain Sisko must unlock the truth behind the fabled Orbs of the Prophets or the future, the past, and even the present will wink out of existence!

This title is due for release on March 1, 2000
We'll send you an email as soon as it is available!