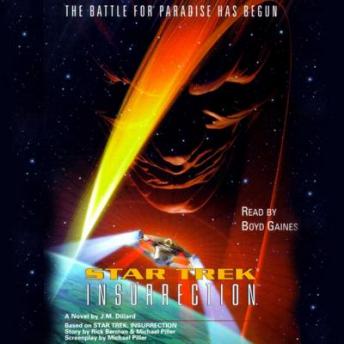 Star Trek: The Next Generation® is the most popular, longest-running series in science fiction history. Now, after the spectacular worldwide success of Star Trek: First Contact® Captain Jean-Luc Picard and the crew of the Starship Enterprise™ return to the big screen in a thrilling new adventure that captures all the fun and excitement of Star Trek at its best.
On an unnamed planet in a distant sector, Starfleet, in an uneasy alliance with a mysterious new alien species of unknown origin, has discovered a secret with astounding implications that could transform the future of the entire Federation. But this secret has a price that may be more than some are willing to pay.
The secret first turns Data against Starfleet, then draws Jean-Luc Picard and the Starship Enterprise into a tense and dangerous situation that has unexpected effects on every member of the crew -- and presents them with an agonizing moral dilemma. Faced with orders he cannot obey and a crisis he cannot ignore, Picard finds himself torn between his conscience and his uniform.
Bestselling author J.M. Dillard has written a powerful and exciting novel based on the major motion picture directed by Jonathan Frakes ('Commander Will Riker'). Star Trek: Insurrection is sure to delight audiences throughout the world.