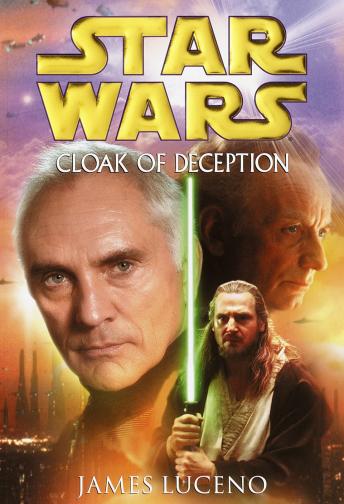 Mired in greed and corruption, tangled in bureaucracy, the Galactic Republic is crumbling. In the outlying systems, where the Trade Federation maintains a stranglehold on shipping routes, tensions are boiling over—while back in the comfort of Coruscant, the hub of civilized space and seat of the Republic government, few senators seem inclined to investigate the problem. And those who suspect Supreme Chancellor Valorum of having a hand in the machinations are baffled—especially when Jedi Master Qui-Gon Jinn and his apprentice Obi-Wan Kenobi foil an assassination attempt on the Chancellor.

With the crisis escalating, Valorum calls for an emergency trade summit. As humans and aliens gather, conspiracies sealed with large sums of money run rampant, and no one is entirely above suspicion. But the greatest threat of all remains unknown to everyone except three members of the Trade Federation who have entered into a shadowy alliance with a dark overlord. While the trio will be content with more money and fewer problems, Darth Sidious has grander, far more terrifying plans.

It is a time that tests the mettle of all those who strive to hold the Republic together—none more so than the Jedi Knights, who have long been the galaxy's best hope for preserving peace and justice. Yet despite their most valiant efforts, the meeting will explode into fiery chaos beyond everyone's worst fears . . .

Being a long-time Star Wars fan, I was skeptical about the stories that were written by people who were not George Lucas. I must say, after getting my first taste with this book, I am left wanting more!! The storyline is so consistent, and it seems like the author crawled into George Lucas' head and was very true to the Star Wars saga. After listening to this book I re-watched Episode 1: The Phantom Menace for the first time since I watched it at the movie theater and was actually able to appreciate much more! The storyline in this audiobook leads VERY WELL into that movie! And the narration and sound effects added greatly to the entertainment value!

Good back story and build up to Phantom Menace. Narrator was slightly monotone

shows the beginnings of the droid army before the phantom menace. the narrator does a terrible imitation of Yoda but everybody can't easily do it. other than that I love it!

When I think of Star Wars I think of a lot of action and adventure. This book sorely disappointed me. I found myself in a hurry to get to the next disk, not because I found it so interesting but wondering where the action takes place. The beginning and the ending were very action packed and exciting but I got tired of listening to the politics in the middle.

This story was okay.. not nearly as exciting as some of the other novels that I have listened to or read. However, for Star Wars enthusiasts like myself, I still think that it is worth a listen.

Its an fun read if you are interested in background stories potrayed in the Star Wars Phanton Menace. For example, why Cancellor Valorum got that vote of no confidence and why Qui Gon and Obi-Wan were so involved. 4/5ths of the book is action and the last 1/5 is the conclusion, aka setup for the Phantom Menace.