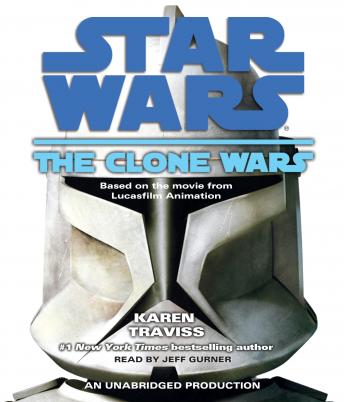 Across the galaxy, the Clone Wars are raging. The Separatists, led by Count Dooku, the onetime Jedi and now secret Sith Lord, continue to press forward, and more and more worlds are either falling, or seceding and joining the cause. Under the leadership of Supreme Chancellor Palpatine, the Republic heroically battles on, championed by its huge army of cloned soldiers and their Jedi generals.

Anakin Skywalker, believed by some to be the prophesied “Chosen One” destined to bring balance to the Force, is now a Jedi Knight under the tutelage of his Jedi Master, Obi-Wan Kenobi. Death is a constant possibility–and his chances of survival aren’t improved by the unexpected arrival of an apprentice: Ahsoka, a brash, inexperienced fourteen-year-old Padawan apprenticed to Anakin. But there’s no time for Anakin to question his latest orders: He and Obi-Wan have been assigned a new mission, and failure is not an option.

Jabba the Hutt’s precious infant son has been kidnapped, and when the frantic parent applies to the Jedi for help, it falls to Anakin, Obi-Wan, Ahsoka, and their clone troops to track down the evidence and retrieve the missing Huttlet. And more is at stake: For a grateful Jabba just might allow the Republic access to the Hutt-controlled space lanes that the Grand Army desperately needs in order to beat the Separatists into submission.

But the Republic is not the only power that craves access to those space lanes. Count Dooku, determined to win the prize for the Separatists, has set a trap for the Jedi. When they find the Huttlet, they will also find Dooku’s master assassin, Asajj Ventress, and countless legions of battle droids waiting to spring a trap.

The blazing new animated feature film Star Wars: The Clone Wars takes place in the years preceding Star Wars: Episode III: Revenge of the Sith and sets the stage for the groundbreaking TV series. Both contain all original material–direct from the brilliant imagination of legendary Star Wars creator George Lucas. And these exciting new adventures and characters are being brought to life in book form by none other than #1 New York Times bestselling Star Wars author Karen Traviss.

This title is due for release on July 26, 2008
We'll send you an email as soon as it is available!