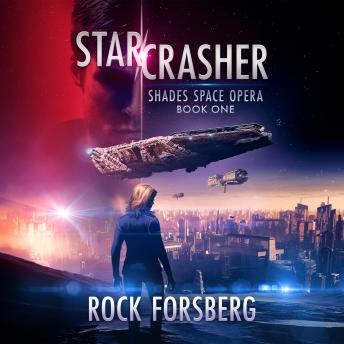 What if the Stars Collided?

Tredd Bounty is a navy reject turned bounty hunter, living in the grimy world of Spit City on orbit around gas giant Heeg. When he is given the chance to take on a dangerous yet lucrative mission to find and capture the mysterious Starcrasher device, rumoured to have the power to move the stars themselves, it seems like his luck is about to turn.

He gathers a motley crew: an ex-navy pilot suffering from random black-outs; a Jindalar groupie hiding a shocking secret; a strapping Andron mechanic unable to step foot on any planet; and an eccentric doctor. Together, they take their battered Rutger-class cargo ship on a journey to uncharted star systems, luxurious space stations, and, against all odds, up against the unyielding Dawn Alliance Navy.

But Tredd is hiding a superhuman secret: the ability to stop time. It is both a blessing that has kept him alive through many a suicide mission, and a curse that has dragged him down. As he travels across the universe, he finds that he can no longer ignore his past, and must face his lost childhood sweetheart and the men who betrayed him years ago.

As he begins to close in on the Starcrasher, so do other, darker forces. Tredd realises he’s not the only one with a dark secret, and that the mythical gods, the Shades, might just be more than just the bedtime story he heard as a child.

New Epic Series is Waiting for You...

Starcrasher is an exhilarating adventure, moving faster than the speed of light through an original universe that combines the technological wonders of the sci-fi genre with urban fantasy. If you loved Hitchhikers Guide to Galaxy, the Space Quest video game series, and Firefly TV series, you’ll love Starcrasher and the Shades Space Opera series.