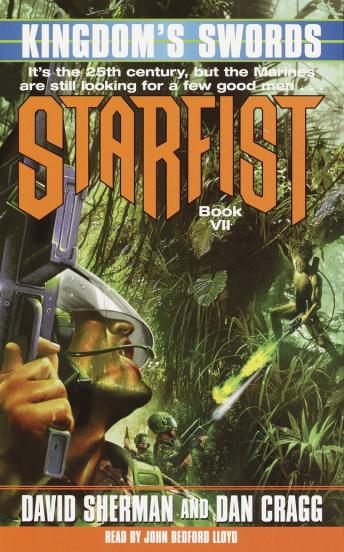 The Marines were told it was a simple peasant rebellion–but the mission proved to be far deadlier. . . .

Gunny Charlie Bass isn’t the only Marine mystified by the order sending the entire 34th to put down a few seditious serfs on planet Kingdom. Rumors swirl of a deadly alien invasion. But few believe that such sentient beings exist. Except Gunny Bass and the Marines of the 3rd platoon, who once fought enemy aliens called Skinks–fierce, fanatical fighters with hideous weapons who attack for no other reason but to kill.

Then, while slogging through Kingdom’s fetid swamps, the Marines are attacked by awesome unseen weapons that could destroy half a platoon with one shot. Clearly they are facing no normal enemy. And if their adversaries are Skinks, one FIST isn’t enough. Third platoon’s orders are to penetrate deeper into the bloody jungle hell–and find out what happens when a few good men bite the bullet. . . .

This title is due for release on May 28, 2002
We'll send you an email as soon as it is available!