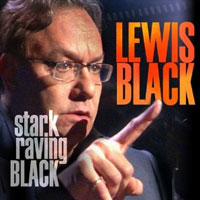 On his new album, Stark Raving Black, Lewis Black brings his singular style of profane and profound humor to the stage. Compelled by his passions and discontentedness with the absurdities of the world, he erupts in a hand-shaking, body-trembling, spewing of diatribe-laced dialectic comedy. Focusing on the personal and the political, Lewis guides his audience through a catalogue of the woes of the world, from the absurdities of aging (60 is NOT the new 40!) to the pitfalls of becoming a "mainstream" comedian to the insanity of Washington and Wall Street.

This title is due for release on June 14, 2010
We'll send you an email as soon as it is available!