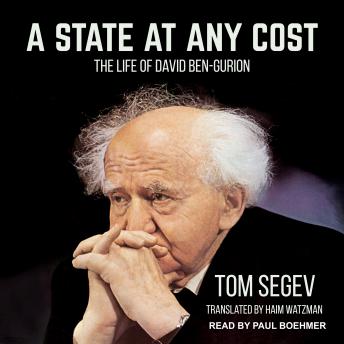 A State at Any Cost: The Life of David Ben-Gurion

In this definitive biography, Israel's leading journalist-historian Tom Segev uses large amounts of previously unreleased archival material to give an original, nuanced account, transcending the myths and legends that have accreted around the Ben-Gurion. Segev's probing biography ranges from the villages of Poland to Manhattan libraries, London hotels, and the hills of Palestine, and shows us Ben-Gurion's relentless activity across six decades. Along the way, Segev reveals for the first time Ben-Gurion's secret negotiations with the British on the eve of Israel's independence, his willingness to countenance the forced transfer of Arab neighbors, his relative indifference to Jerusalem, and his occasional 'nutty moments'. Segev also reveals that Ben-Gurion first heard about the Holocaust from a Palestinian Arab acquaintance, and explores his tempestuous private life, including the testimony of four former lovers.

The result is a full and startling portrait of a man who sought a state 'at any cost'-at times through risk-taking, violence, and unpredictability, and at other times through compromise, moderation, and reason. Segev's Ben-Gurion is neither a saint nor a villain but rather a historical actor who belongs in the company of Lenin or Churchill.