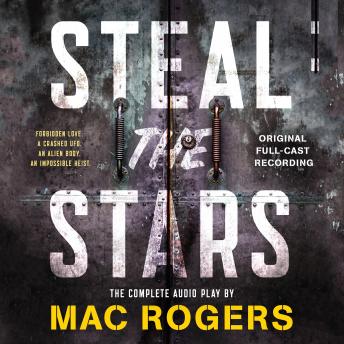 'Bundling a successful podcast with other material, this audio program makes an attention-grabbing listen...The episodic sci-fi thriller that results is a listening feast.' - AudioFile Magazine

This audio book includes all fourteen episodes of the Audio Verse Award-winning podcast series, plus exclusive bonus content, including the live staged reading of the prequel episode, 'Deputy'; a round table discussion with the creators; and more.

Dakota "Dak" Prentiss guards the biggest secret in the world.

They call it "Moss." It's your standard grey alien from innumerable abduction stories. It still sits at the controls of the spaceship it crash-landed eleven years ago. A secret military base was built around the crash site to study both Moss and the dangerous technology it brought to Earth.

It's love at first sight-which is a problem, since they both signed ironclad contracts vowing not to fraternize with other military personnel. If they run, they'll be hunted for what they know. Dak and Matt have only way to be together: do the impossible. Steal Moss and sell the secret of its existence.

And they can't afford a single mistake.

Also available from Tor Books: Steal the Stars, a novel by Nat Cassidy, the official adaptation of the podcast and an NPR Book of the Year.