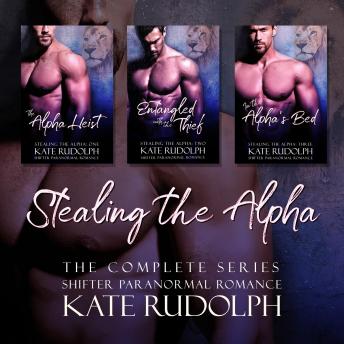 Stealing the Alpha: The Complete Series

For the first time all in one place, read the series that readers are calling 'captivating,' 'fun,' and 'intriguing.' Join shifter thief Mel as she clashes with lion alpha Luke in an explosive trilogy of two opposites who can't keep away from one another. What starts as a simple mission leads them on a journey that could change their lives... or end them.

Stealing one gem? How hard could it be?

For the supernatural world's foremost thief, impossible is an irresistible challenge. Especially when the payment for this job will get her one step closer to finding the woman who ruined her life. When the jobs goes belly up, Mel is trapped in the lion's den and facing off with the sexiest man she's ever met.

Entangled with the Thief

To heal his sister, Luke will do the unthinkable. As the attraction bubbles between lion and thief, their lives are more entangled than they ever dreamed. A threat from Luke's past drives them even deeper into danger and soon Mel and Luke are on the edge of total destruction.

In the Alpha's Bed

Luke could never have predicted the path that Mel would bring him down. But now he'll do anything to save his sister's life and capture his thief's heart. Ava threatens his pack, determined to steal a magic artifact of immense power that he never knew he possessed.

Listen today to join this alpha and this thief on the adventure of a lifetime.

Stealing the Alpha: The Complete Series