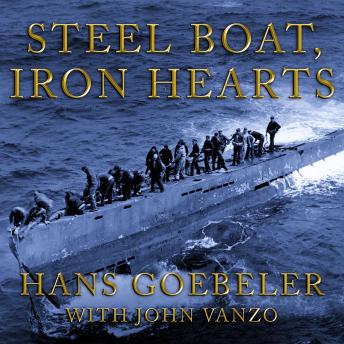 Steel Boat Iron Hearts: A U-boat Crewman's Life Aboard U-505

Using his own experiences, log books, and correspondence with other U-boat crewmen, Hans Goebeler offers rich and personal details about what life was like in the German Navy under Hitler. Since his first and last posting was to U-505, Goebeler's perspective of the crew, commanders, and war patrols paints a vivid and complete portrait unlike any other to come out of the Kriegsmarine. He witnessed it all, from deadly sabotage efforts that almost sunk the boat to the tragic suicide of the only U-boat commander who took his life during World War II. The vivid, honest, and smooth-flowing prose calls it like it was and pulls no punches.

U-505 was captured by Captain Dan Gallery's Guadalcanal Task Group 22.3 on June 4, 1944. Trapped by this 'hunter-killer' group, U-505 was depth-charged to the surface, strafed by machine gun fire, and boarded. It was the first ship captured at sea since the War of 1812. Today, hundreds of thousands of visitors tour U-505 each year at the Chicago Museum of Science and Industry.

This edition includes a special foreword by Keith Gill, curator of U-505 at the Museum of Science and Industry.

This is an awesome find. I could feel the cold, clammy steel of the hull and smell the stink of the bildge.

This title is due for release on July 31, 2016
We'll send you an email as soon as it is available!